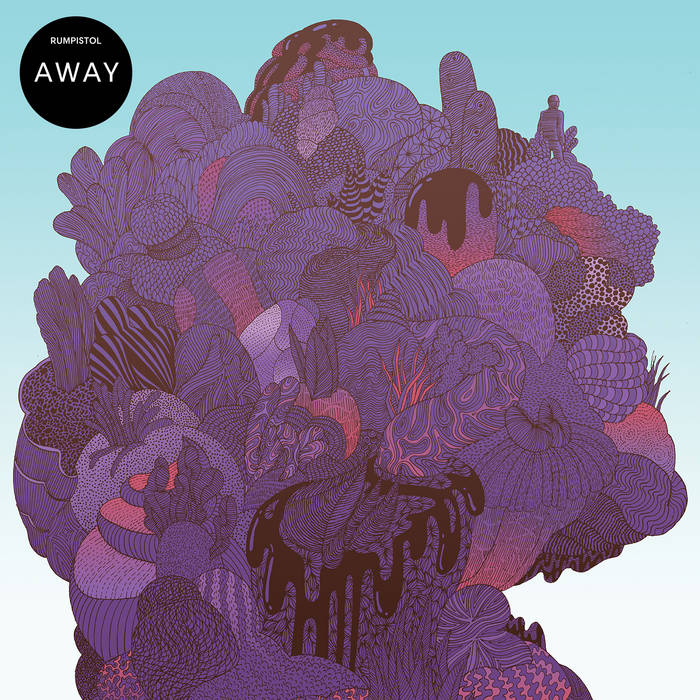 fjoggedelic1969 Another gem from the Danish master of soundscapes and moods.

Thomas Filepp Beautiful and subtle, but full of all sorts of surprises. Favorite track: A Dream.

Rumpistol's 5th full album is called "Away" and references, among other things, the isolation, absence and loss that comes with the creative process, but also the privilege of being able to disappear into another world and be 100% present in the music.

After Rumpistol's recent collaborations with vocalists Red Baron (The album "Floating" released on Project Mooncircle in 2012) and John LaMonica (the It's Everywhere EP from 2013), he now returns with another step forward in the outgoing direction while acknowledging the finest moments of his earlier instrumental releases too. This is especially heard in the strong focus on detail and the choice of acoustic instruments as a fixed companion to the electronic machinery.
The album features American singer/songwriter John LaMonica, LA-residing Red Baron and Katerine Mills-Rymer of OOFJ.

The title "Away" was chosen because many of the tracks on the album obviously deals with absence and the many ways to get lost or to disappear into something else. Whether existentially or in the escapist sense - to be on the run from something or to be heading somewhere unknown – a driving force that Rumpistol has often mentioned in relation to his creative process.

"Everyone knows what it means to be absent, or the unpleasant and almost humiliating feeling it can be to be around absent minded people. Paradoxically, absence usually springs from a total presence. So when you're 100% absorbed in one thing then you tend to forget everything else around you. This is the zone I enter when I work alone with my music " Rumpistol explains.

Like most electronic musicians and composers Rumpistol has always worked alone, so the isolation is a basic condition requiring a certain personality, which some might perceive as introverted or even nerdy.
Rumpistol's great devotion to analogue sounds shows a passion which some might find kooky too. A passion for deliberately squashed cassette tapes, reel-to-reels, crackling vinyl and vintage synthesizers from before the digital age, where sounds were designed from scratch - slowly with patience and good craftsmanship.
This analogue element mixed with Rumpistols bitter-sweet compositions and subtle use of children's voices evokes a feeling of nostalgia, where washed-out memories of childhood comes alive. Like on the first single "Asleep" which features elements of an old Danish childrens song or "Adrift" where Rumpistol samples a recording of himself as a child.

The title track (a duet between Red Baron & Katherine Mills Rymer of OOFJ) as well as the track "A Fall" brings the subject of struggling relationships to the table, while the majestic closer "Atacama" feat. John LaMonica sees absence in a much larger universal perspective, taking inspiration from Guzmans documentary ”Nostalgia For The Light”.

With elements from juke, ambient, house, IDM & drum’n’bass, "Away" elegantly summarizes Rumpistol ability to produce highly elaborate and genre crossing electronic music, that still bears a human face, while integrating sonic details with microscopic precision, that can only be made possible by many hours - days - even months of strenuous work in the studio.

It’s an ability that has gained love from critics & DJs alike, from BBC’s legendary John Peel to French techno star Laurent Garnier and Om Unit, and has brought him to venues like Boiler Room UK and MUTEK Montreal.

PRESS:
”Record of the Month” on Radio Eins Elektrobeats (DE).