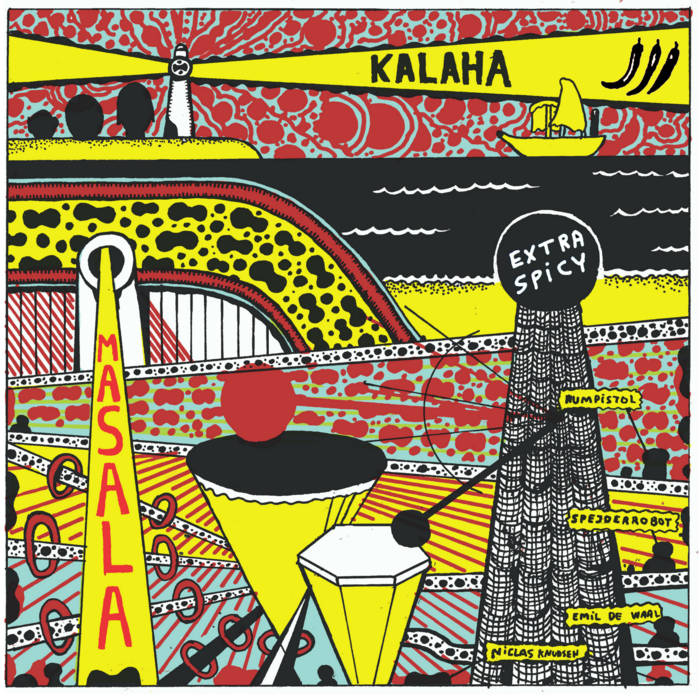 Kalaha's award winning album 'Masala' is getting an 'Extra Spicy' reissue along with a repressing of the vinyl including 3 brand new remixes from Shatter Hands, Spejderrobot and Zack Christ.

Shatter Hands (Berlin Zoo) has stripped down "Nguni" to the bare necessities delivering an uptempo version, driven, mainly by the two musical elements he favours the most: dirty drums and gritty bass, sprinkled with some laid back rhodes.

Kalaha's own Spejderrobot builds a bridge between 90s Basic Channel dub and glitchy IDM beats in his deep take on "BWW".

Last, Copenhagen's Zack Christ delivers an insane take on "Aloo Gobi" which in all its frenetic breakbeats, jazzy chords and over the top talk box guitar lies utterly beyond classification.

In December 2017 "Masala" won a Danish Music Award Jazz in the category "Special Release" in December and received the following words from the academy:

"The musicians of this release merge together in a droning landscape of sound and playfulness. At times you feel like you are in a clay cabin in Africa's roaring savannah - the next moment you are blown away into a distant galaxy on a space trip surrounded by flashing lasers and bubbly sci-fi sounds. With their unpretentious approach to music and their distinctive soundscapes, they are able to point Danish jazz in an exciting direction while showing how globalization has found its way onto the Danish music scene."

Kalaha is getting ready to play the European festivals this summer including Boomtown Fair (UK) and Copenhagen Jazz Festival.

The band is now ready with their first studio album "Masala" which is also the third and final part of the band's 2016 trilogy.

The first part of the trilogy "Quarquaba" was nominated for a Danish Music Award in the World Music Composer category. The trilogy's second part was called "Wahwahwah" and in the third and final part "Masala” we get the whole trilogy combined plus a little extra.

The title "Masala" comes from the fiery Indian spice blend: precisely because Kalaha is the very epitome of a strong mix; distinctive electronic sound design and stellar instrumentalism are effectively mixed together, just like the 4 musicians' western backgrounds are mixed with the input of other continents.

On "Masala" the band has been particularly inspired by traditional music from both Africa and China, and retro-futuristic movements within electronic music and jazz.

With over 25 concerts in 2016 alone, Kalaha has developed into an exceptional live band and has reached as far abroad as Belgium, Poland, Finland, China and Korea. The amount of shows has stimulated the band's sound which has become more aggressive, and with their highly danceable material they've also captivated a younger and more club-oriented audience.

However, jazz listeners and world music enthusiasts have plenty to look forward to when Kalaha sets sail for distant climates and packs the suitcase with everything from Nigerian funk (Tippi Tabu), Ethio-jazz (Aloo Gobi) to Chinese New Age (Hutong) along the way.

Kalaha's music is a constantly changing mix of quirky ideas, solid grooves and precision that never loses its nerve, audacity or flavour.

"I loved "Masala" and have played it a bunch on my show" - Mathieu Schreyer / KRCW Los Angeles (US).

"There’s that something about Kalaha’s music that makes me keep coming back to play it, listen to Masala just once & you’ll see what I mean." - Kerem Gokmen / Dubmission, 91.3 WYEP (US).

Recorded by Troels Bech at Mir Studio.
Produced and mixed by Spejderrobot and Rumpistol.
Mastered by Antony Ryan.
Artwork by Zven Balslev.