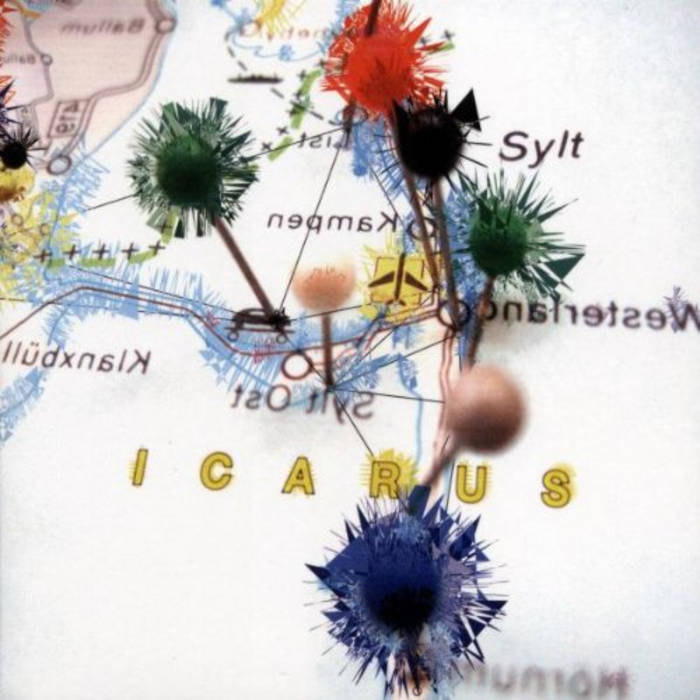 'Sylt' is Icarus' first album in two years, following the understated 'Carnivalesque' in 2005, and the acclaimed 'I Tweet the Birdy Electric' in 2004, over which time the duo Ollie Bown and Sam Britton have continued working on related projects in electroacoustic performance, composition and music-related research.
The album builds on the band's inquisitive approach to electronic music production acquired over 6 album releases spanning over a decade, and spread across a mix of record labels: The Leaf Label, Output, Hydrogen Dukebox, Temporary Residence, Not Applicable, and for this latest release, Rump Recordings.
'Sylt' was devised around two extended improvised tracks, 'First Inf(E)Rænce' and "Second Inf(E)Rænce', taken from one live performance in Toulouse in 2006. These recordings represent the accumulation of unreleased material built up over a spate of live performances as well as the documentation of the band's development of an improvised electronic music style in which flourishes of rhythmic and harmonic structures are restlessly set up against each other by the duo.
Alongside these live recordings, 'Sylt' also revisits the recognisable structures of Icarus' earlier anthemic style in tracks such as 'Keet' and 'Volks', outbursts of joyous rhythmic lunacy in the bricolage of 'Selfautoparent', and a developing sense of instrumental musique concrète in tracks such as 'Jyske' and 'Rugkiks'.

"Imagine placing albums by Four Tet, Amon Tobin, Squarepusher, Murcof, Lutz Glandien, György Ligeti, Iannis Xenakis, SND and Philip Glass into your cd changer and then pressing play only to find them all playing at the same time." - KS/Experimusic.com

"Icarus are one of the most underrated and overlooked electronic groups who are so perfect at their craft, it almost concerns me how they´ve gone virtually unnoticed. They deserve far more attention then they have ever gotten throughout their entire career, and it is my hope this album will prompt people to invest time into the strange, wonderful and confusing musical progression that is Ollie Bown and Sam Britton´s music project, Icarus." - Eric Common/The Silent Ballet

"I'm sure I'll be hearing much more of your work" - Evan Parker, after an improvised electro-acoustic concert featuring Evan, Ollie, Sam and George Lewis

"Sylt is a wonderful deep album that proves that experimental music can be accessible to a bigger audience. One of the most surprising new albums in 2007. Perfect!" - Michael Mück/Cuemix Magazine

"Sam Britton and Ollie Bown create uncompromising experimental improvised music that manages to be at once evocative and captivating, and Sylt only serves to strongly reinforce their vision." - Bruno/The Milk Factory

Written and produced by Sam Britton and Ollie Bown. The Inf(e)Rænces were recorded live at Les Abattoires, Toulouse, on 20th May 2006, the second one immediately following the first. The other tracks are all combinations of live and edited work. The field recordings at the end of Volks! are of Greek football supporters outside a gig that never took place, Bios, Athens, 2004. Concatenative synthesis courtesy of Diemo Schwarz. Thank you Oliver, Jens and everyone who has invited us to play over the past couple of years. Mastered by Will Worsley.